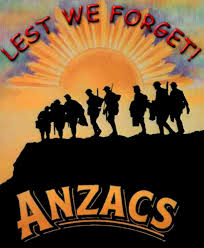 Most local school principals embraced the project which focussed on:

All students taking part were given a conducted tour of the Shrine of Remembrance in Melbourne. The schools, themselves, have chosen the winning entries. RCGW will take the winners on a trip to the War Memorial in Canberra.

Here, students from South Oakleigh, Sir John Monash Science School and Brentwood Secondary College lay a wreath. As they did so, their schoolfriends chorussed a moving 'Lest we forget!'Perhaps the most awful thing about the sacrifices of Gallipolli  is that many of the soldiers who died were little older than these students.

Our tour guide told us about:

The tour ended with a simple but poignant symbolic remembrance and - perhaps most important of all - a smile.