Here we see Ray White Real Estates'  pro bono auctioneer Danny Zhuang  offered the Club's gratitude and thanks by Graeme Woolacott and Tony Hough in the presentation of a framed certificate appreciation and a small gift. Danny mentioned that he has conducted in the past a few Charity Auctions but our 14th. October Charity Auction had been the longest he had undertaken, time wise. The Charity Auction had been postponed in February of this year as a result of Covid disruptions. At the time of Postponement we allocated $2,250 each to the Glenallen School and Canteen out of $5,250 we had collected in support of the Charity Auction.

Danny's efforts at the 14th October Charity Auction had resulted in the Glenallen School and Canteen each receiving $4,950. The donation to Canteen has eventually resulted in it being matched dollar for dollar by Canteen's commercial supporters. So in total it could be said that our Charity Auction was a conduit for the raising and distribution of over $21,000.00 for the Glenallen School, Canteen and the Rotary Club of Glen Waverley. 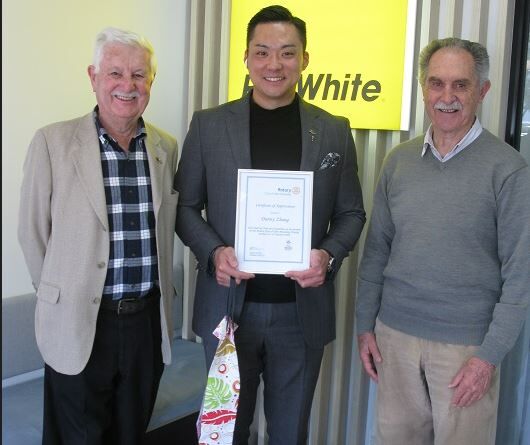